Muslim News Nigeria has joined the the rest of the free world to celebrate the 2020 edition of the World Press Freedom Day (WPFD) with the theme, “Journalism Without Fear or Favour”.

The Publisher of Nigeria’s most authoritative Islamic newspaper, Rasheed Abubakar, raised concern over the growing cases of Islamophobia amid the Coronavirus pandemic.

Abubakar made the disclosure in Lagos, Southwest, Nigeria on Sunday, saying that far-right extremists have turned COVID-19 into a potent tool to attack Islam and Muslims across the world.

In the press release, Abubakar cited India, the world’s largest democratic country, where smear campaign against Islam and Muslims is being orchestrated by the Nerandra Modi led Bharatiya Janata Party (BJP) government, with the support of the media.

According to him, “We are living witnesses to what’s happening in India where the over 200 thousand Muslim population are being discriminated against. It started with the law that denied Muslim minorities citizenship.

“The Muslims who protested against the law were attacked by the mostly Hindu BJP supporters with the support of India’s police. Mosques were destroyed as many innocent Muslims lost their lives.

“Many India media outlets, unfortunately, underreported violent attacks on Muslims. The few that exposed the police complicity in the killing of Muslims by Hindu extremists were banned by the government. Although the ban was later lifted following global criticism of the increasing spate of Islamophobia in India.”

Abubakar said there has been a renewed wave of discrimination against Islam and  Muslims in the media since India recorded its first Coronavirus case in January.

“The BJP extremists with the support of India media claimed that the virus is a conspiracy by Muslims to infect and poison the over 900 million Hindu population. They spread misleading information on social media with hashtag #coronajihad to blame the entire Muslims for the Coronavirus pandemic.

“In order to continue the stigmatization of Muslims, Indian hospitals segregated Muslims and Hindus affected by COVID-19. The latest is the call for boycott of Muslims by the BPJ leader.

“All these events didn’t get prominence in the media because many of them have been compromised, going against the ethics of the profession. They didn’t report facts, instead spreading misinformation targeting mainly Muslims.” 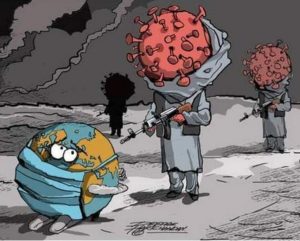 “The Hindu” news paper displays a cartoon of Corona virus with Muslim attire. What does this indicate. Are not these blood thirsty mainstreams done with Muslim hatredness? Condemn #Islamophobia. The paper later apologized for its “completely unintentional” decision to link the crisis to Muslim terrorists, and replaced it with a more neutral image.)

Abubakar also noted that right before the beginning of Ramadan 2020, mainstream media in the West have been assisting far-right supremacists in spreading anti Muslim bigotry in countries like Denmark, France, the UK and the United States of America.

In a tweet on March 23, The Economist promoted a story on the Maldives by declaring that “the arrival of covid-19 was expected. The spread of radical Islam has been more of a surprise.” The magazine has since taken down the tweet — but not the story itself. 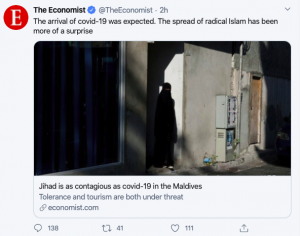 Abubakar therefore called for action to be taken against growing Islamophobia in the media, saying that discrimination against Muslims is more dangerous than Coronavirus.

“There is no justifiable reason to gather every May 3 to call for the defence of journalism, especially in countries where journalists’ rights are under threat, without addressing the growing media bias and violent attacks against innocent Muslims.

“As the world’s journalists continue to wield their pen in the defence of truth, and in the face of all anti-media elements, we hope they will continue to ‘Stand up firmly for justice, as witnesses to God, even though it be against yourselves, or your parents, or your kindred, be they rich or poor. God is a Better Protector to both (than you)’, as demanded by Allah (SWT) in Qur’an 4: 135,” he added.