IMWU is a global Muslim women organisation with representation of over 45 countries and counting.

Despite the effect of the Coronavirus pandemic on the world economy, the Nigerian Office of the International Union of Muslim Women (IUMW) has distributed Qurbani (sacrificial meat) to Muslim families in Lagos on the occasion of the Eid-ul-Adha celebration.

The country’s representative on the Board of Trustees, Hajia Sherifah Yusuf-Ajibade addressed the needy families who were drawn from different areas within Lagos state, Nigeria’s most metropolitan city. 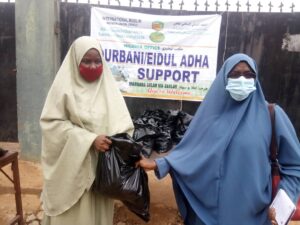 She said, “We thank Allah for making us witness this year’s Eid celebration. Despite the hard economy being experienced globally as a result of the pandemic, our women organisation in Malaysia didn’t forget her humanitarian support to the Nigerian Muslims”.

Hajia Yusuf-Ajibade however said unlike the 2019 edition which was held simultaneously in three states (Abuja, Lagos and Osun), this year’s distribution was slated for only Lagos (at this centre).

According to her, “Last year, we reached out to 151 Muslim homes and 400 Internally Displaced Persons (IDPs) in three States. But this year’s distribution was limited to Lagos due to COVID-19 lockdown order which has affected economies globally. 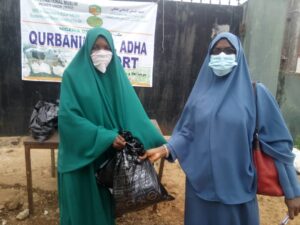 “The good news is that apart from the meat package; which can last a family of 6 for one week, we are also giving them cash. We believe that it will go a long way to support the needy families by Allah’s permission. We thank our sister branch in Malaysia for supporting this gesture. We pray and hope that next year will be bigger,” she added.

Hajiah Yusuf-Ajibade called on the government and well-to-do individuals to see to the welfare of the populace and support organisations involved in charity works.

“I think, it is part of the functions of the government to assist the poor through poverty alleviation programmes or charity organisations, before, during and after Eid. 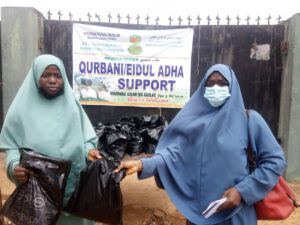 “In our own parlance, it is said that ‘once hunger goes out of poverty, the poverty is gone’. So if they have food to eat, people won’t go into crimes, cajoled into taking drugs and lured into criminal activities  which are prevalent in our country, today. So, government should support the families with palliatives to cushion the effect of the economic impact of the COVID-19 restriction on their businesses,” she noted.

The smiles, joy and happiness on the faces of the beneficiaries knew no bound as they spoke with Muslim News, after receiving the meat and cash donations.

“This distribution made us happy,” Mrs Rabiu Simbiat told Muslim News, adding that, “Because many of us could not slaughter Rams. If we prepare this for our families, they will be happy and we can even give our neighbors because it’s not what we can finish alone”. 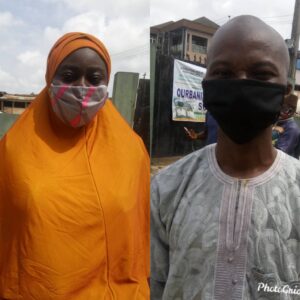 Mrs Rabiu, who appreciated the organisers, prayed, “We asked Allah to reward all who participated in the distribution — organisers, donors and others abundantly. We also pray that Allah makes us amongst those that will also be giving to others.”

In his own submission, Mr AbdulSalam Yusuf said, “On behalf of myself and my family, I commend IUMW for this distribution. It is a welcome development. We expect Nigerian organisations to emulate this gesture”.

The International Muslim Women Union (IMWU) is a global group of Muslim women organisations with its Board of Trustees at the headquarters in Khartoum, Sudan and branches in different countries of the world, which majorly represent Muslim women across the globe in affairs that particularly concern them. 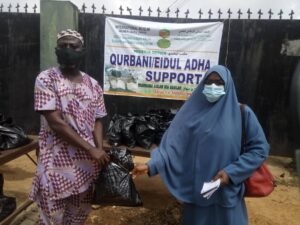 Activities of the IUMW Nigeria Office include counselling sessions for university students, provision of relief materials during Ramadan, rendering assistance to female students to secure admission into Sudanese universities on scholarship amongst others. 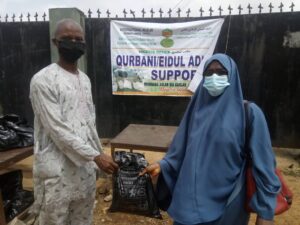 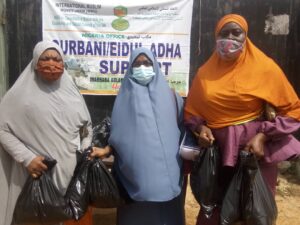 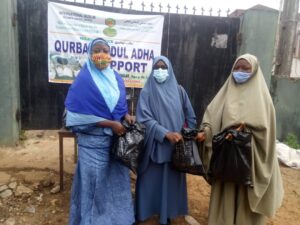 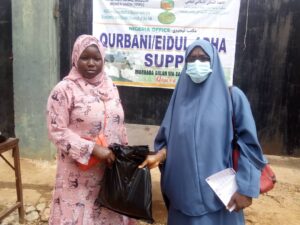