For those who have seen the epsiode one and two of the newly premiered Season 2 of Kurusul Osman, the Turkish drama series, it is no longer news that popular actor, Engin Altan Duzyatan didn’t return as Ertuğrul Ghazi.

Engin, who impressed millions of fans across the world with his classy character performance, played the lead actor, Ertuğrul Ghazi in the 448 episodes seasons 1-5 series (English subtitles) on Netflix, which was released between 2014 and 2019.

The storyline continues in Kurusul Osman, (meaning, Establishment of Osman), and centred on the life of Ertuğrul’s last son, Osman’s internal and external struggles towards the establishment of Othman Empire.

The season 1, earlier released last year also featured many characters that played Ertuğrul Bey’s loyal Alp, such as Bamsi Alp, Abdur Rahman Alp and his brother, Gündoğdu’s wife, Selcan (whose character was mother to Osman) with cameo appearance of his eldest brother, Sungurtekin.

The season 1 however ended in episode 27 without the appearance of Ertuğrul Ghazi and his loyal Alp, Turgut Bey, among others.

Despite disappointment, fans were certain that Engin would return in Season 2, playing his original character as Osman’s father.

They were also eager to see the aged look of Ertuğrul Ghazi as he makes his first appearance, but to their disappointment, the makers of the film unveiled a new character; Tamer Yigit, who will continue to play the role of Ertuğrul in the newly premiered season two.

Who is Tamer Yigit?

Born on January 1, 1942 in Balikesir, Turkey as Tamer Özyigitoglu, the 78 year old actor is married to Bayrak, Rukiye since 1973.

They have three children.

It is not really clear why Ertuğrul character, Engin didn’t return to continue playing his historic role in the ‘Establishment Osman’, but some sources said the gifted actor was working on another project, which required him to shave his beard.

Going by his previous interview with www.turkishcelebritynews.com, Engin said he intended to rest a while after almost six years of working with the Director, Metin Günay team.

He said, “I worked out of love at that project, it was so beautiful. We have finished our project (Resurrection Ertugrul) and a new one has already started. The people who are working there are all my friends. The same team continues to work on this new project (Establishment Osman). I see and follow their work and I like it. 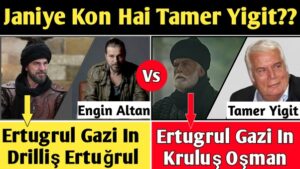 “This is a matter of plan, we haven’t planned to break up with the team but Establishment Osman is a new project. I want to have a rest for a while. Right now, there is no such thing to be involved in this project.”