The Chief Executive Officer (CEO) and founder of Islam Channel, Mohamed Ali Harrath, has been named the winner of the Global Muslim Media Person of the Year 2020 Award.

The Tunisian-born and UK-based activist turned media entrepreneur emerged as the winner of the prestigious international award, tagged #MNAwards2020, after rigorous deliberations.

The announcement was made in Lagos, Nigeria, on Monday, February 22 by the organisers of the award, Muslim News, Nigeria’s most authoritative Islamic newspaper.

It would be recalled that the newspaper announced veteran journalist, Femi Abbas, as the winner of the Nigerian Muslim Media Person of the Year, two weeks ago.

In a statement signed by Mr. Rasheed Abubakar, the publisher of Muslim New and organiser of the prestigious awards, Harrath’s choice as the global media person of the year was based on his continued promotion and preservation of pristine Islamic values, especially through his media outfit, Islam Channel.

Mr. Abubakar said, Harrath did not only sustain the world’s leading faith-based media for more than a decade, but he also added that through Islam Channel, the media guru has been able to create jobs for thousands of Muslims and non-Muslims since the channel was founded in October 2004.

According to him, “The new week begins with the announcement of the second phase of the #MNAwards2020 winners, which focuses on celebrating global Muslim achievers who have made the Ummah proud in their different professions.

“Like the first phase which honoured Nigerian Muslims in media, health, finance, law, and entertainment, this second phase – otherwise known as Global Muslim Personalities of the Year Awards, will follow the same procedure.

“Today, Monday, February 22, we begin with the Global Muslim Media of the Year and the winner is no other than Mohamed Ali Harrath, the Chief Executive Officer (CEO) and Founder of Islam Channel,” the statement read in part.

Mr. Abubakar said the winner has changed the world’s perception of Islam as a violent religion and of its adherents – Muslims, with the introduction of this alternative media, which has its headquarters in the UK, adding that, “The English language, Islam-focused satellite television channel is being broadcast to millions of Muslims worldwide, including Nigeria (on several DTH platforms).”

Speaking further, “establishing this type of medium which has a wide range of interesting and educative programmes for Muslims of different cultural backgrounds, nationalities, and sustaining its quality since 2004 is a great feat that should be acknowledged, knowing full well how difficult it is to run a successful faith-based media outfit.”

Declaring Harrath winner of the award, Abubakar said, “Harrath — who has been wrongly criticised; who fought and won against stereotypes and Islamophobic media, is a motivation and inspiration for us at Muslim News Nigeria, and to some other young Muslim entrepreneurs who have or want to venture into the highly competitive media industry.

“What we plan to make grounded at Muslim News Nigeria includes celebrating Muslim achievers, promoting diversity, and countering anti-Muslim sentiments among others, was inspired by the activities of Islam Channel’s Mohamed Ali Harrath.

“It’s on this note, after considering these feats, alongside the criteria of other nominees who are doing great things individually, especially in the area of fighting Islamophobia, it is our pleasure to declare our brother, Mohamed Ali Harath the winner of this year’s Global Muslim Media Person of the Year 2020. May Almighty Allah accept this as an act of Ibadah.”

Harath was born in Tunisia in 1963 but relocated to England in 1995 and by the year 2000, he was granted refugee status and indefinite leave to stay in the UK. Four years down the line, the respected Muslim entrepreneur founded what would later become the world’s leading Islamic media platform, Islam Channel.

Given his desire to expand his media reach and audience, the founder introduced Islam Channel Urdu, a language spoken by over 70 million people, especially in Pakistan and India, with a rich variety of well-researched and soul-inspiring programmes for all demographics – the aged, youth, children and grandchildren of all gender and race.

The medium adjusted to what it called the “ever-changing media landscape” by appointing, Mars El Brogy as its head of production – the first female to hold that position.

Reacting to the appointment, the CEO said, “The fact that she is the first woman to have held this position within the channel is a matter of extreme pride. Diversity is very important to Islam Channel and female Muslim voices are under-represented in the British media. This is a chance for us to set the agenda and take a lead in this respect.”

In an interview with Muslim News, the 2020 Global Muslim Media Person of the Year, which launched its first-ever charity donations platform “Islam Channel Giving” last year,  spoke on finance as one of the major challenges facing the sustainability of a strong alternative media organisation.

He said, “Muslims don’t lack the funds. Muslims have money. We do have a lot of money but the challenge is consciousness. Muslims do not attribute a lot of importance to the media. I think we have to start educating fellow Muslims. We have to make them realise how important the media is and convince them to invest in it.

“We don’t look for donations but investment and Muslims need to invest. We want Muslim elites to come out with media ideas that are also commercially viable. We need to have that balance – commercially viable media including business plans.  At the same time, we need Muslim millionaires, businessmen to invest in Muslim media.”

Harrath, who revealed plans to start production of Islam Channel in Nigeria in 2021 juxtaposed using media as a tool for religion and a tool for business. 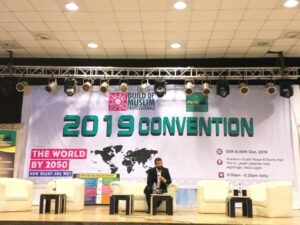