The Turkish-born scientists in Germany, Özlem Türeci and Uğur Şahin have been named the Global Muslim Health Persons of the Year 2020 by Muslim News, Nigeria’s most authoritative Islamic newspaper.

The duo – a couple, are the brains behind the invention of the Pfizer-BioNTech COVID-19 vaccine which was first approved by the United Kingdom, Canada, and several other countries in the global fight against the pandemic.

Tagged #MNAwards2020, the Award committee which comprises professionals from various fields of the study stated that the vaccine was also authorised by different international organisations, including World Health Organisation (WHO), European Medicines Agency (EMA), and US Food and Drug Administration (FDA), among others.

With the authorisation, it is now easier for other countries to seek the approval of their regulatory agencies to import and administer the vaccine. 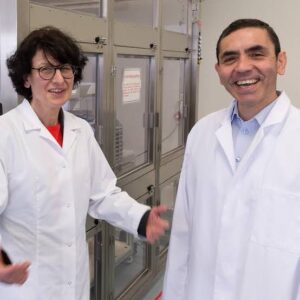 In a press statement issued on Tuesday, February 23, the newspaper’s publisher, Rasheed Abubakar, exalted the intellectualism and research prowess of the couple, who he described as “true adherents of Islam”.

It would be recalled the newspaper announced Dr. Saliu Oyelami, the Medical Director of Shifauk Hospital, Akure, as the 2020 Nigerian Muslim Health Person of the Year, two weeks ago.

According to Mr. Abubakar, “In their quest to save about 7.8 billion global population from imminent death and disability due to the COVID-19 pandemic, Dr. Sahin, the Chief Executive Officer, together with his wife, Dr. Tureci, the Chief Medical Officer of BioNTech, a pharmaceutical company established in 2008, partnered with America-based Pfizer, to invent the highly-prized COVID-19 vaccine within a year.

“Research has shown that it is almost impossible to create a vaccine within a year but due to its urgency, the two companies were able to save the world from the virus by providing a vaccine, having successfully gone through three phases of clinical trials. The Muslim couple behind the idea deserve acknowledgment from the world.”

Speaking further, he stated, “COVID-19 erupted in Wuhan, China in December 2019 and spread rapidly within and outside the Hubei Province and engulfed a large number of countries. The pandemic has wreaked havoc on humanity, causing loss of lives, economic meltdown and distortion of social life and patterns.

“While epidemiologists working in centres for disease control and preventions provided the statistical results for the dissemination of epidemiological data, researchers/scientists all over the world have joined the race to discover an effective vaccine against this virus that has claimed more than 2.4 million lives as at Tuesday, February 23, 2021. 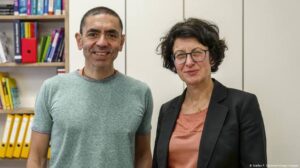 “The two Muslim scientists, Türeci and Şahin however came through, defying all odds to invent the much-needed vaccine for the sake of humanity. The Muslim couple have done Islam and Muslims proud with their remarkable and outstanding feat. They deserve to be celebrated,” he added.

Mr. Abubakar, who created the Award in 2018 to celebrate excellent Muslim achievers in their various professions, said Islam places a premium on the sanctity of life, adding that saving a life in Islam is equivalent to saving humanity, as stated by the creator of the universe in Quran 5: 32

“We at Muslims News Nigeria are happy with this feat because it’s essentially an addition to numerous cases, nullifying the stereotyping and profiling of Muslims. When news of their invention was made known to the world, nobody remembered that they are Muslims, the same way they would be labeled Muslims if they had done something bad.

“Some people even said their religion doesn’t matter, but we ask, why doesn’t it matter now? Why shy away from the fact that they’re Muslims? If the mainstream media did not focus on this fact, or about their Turkish origin, it is then our responsibility as a faith-based media outfit to change not only the narrative but celebrate their success for the world to know.

“We congratulate the couple. We celebrate them and it is our prayer that this recognition will spur them to do more for humanity. Their achievement in the area of science is the definition of what Islam stands for,” he added.

The couple are Turkish physicians-turned-scientists who met in Germany. 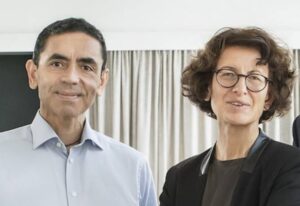 Şahin, for his part, is a renowned Professor of Immunology at the University of Mainz, Germany, while Türeci is an expert in the field of Oncology.

Şahin had in 2019 clinched the Mustafa Prize for Muslims in Science and Technology, an award named after Prophet Muhammad by the Khuddame Mustafa for his development and clinical testing of mRNA-based cancer vaccines that can be tailored to individual patients’ motivation profiles.

The couple were also named People of the Year by international news medium, Financial Times in 2020.