Right inside Lagos, the Centre of Excellence and commercial nerve centre of Nigeria to other States of the Federation, there are several Islamic camping programmes for Muslim students, professionals and artisans – both male and female – during the festive period.

Muslim News Nigeria presents the details of the camps below:

For The Muslim Congress (TMC), its 25th National Islamic Training Programme (NITP) with the theme: Provisions for the Nation holds from today, Friday 21 to Tuesday 25 December 2018 at various venues across the federation.

The South South/South East delegates of the organization, which comprises of Edo, Delta and Rivers States would have theirs at Allahu Nur Central Mosque, Odani Green City, Elelewon, Port Harcourt, Rivers State while their Northern counterparts from Abuja, Niger and Nassarawa States will converge at Government Science Secondary School, Pyakasa, Maitama, FCT, Abuja.

The Guild of Muslim Professionals (GMP) would have her 6th Annual Convention themed: Transformational Leadership, Good Governance and the Muslim Professionals. The convention is scheduled to hold between 22nd and 25th December, 2018 at the Peninsular Resort, Km 25, Lagos/Epe Expressway, by Abraham Adesanya Roundabout, Ajah, Lagos State.

Muslim professionals from different disciplines, including accounting, medicine, law, journalism, education, administration, politics, economics and others are expected to attend the Convention. 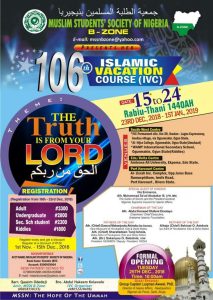 The MSSN B-Zone is also billed to host her 106th Islamic Vacation Course with the theme: The Truth From Your Lord, to hold from 24th December, 2018 to 1st January, 2019. 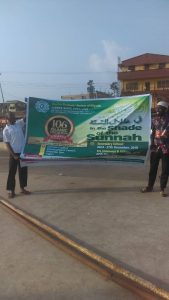 The Muslim Students’ Society of Nigeria, Lagos State Area Unit has scheduled its 106th Islamic Vacation Course (IVC) themed: In the Shade of the Sunnah.

The camp is slated for 22nd to 27th December, 2018 for its secondary school members while the TFL (Primary) and other members are scheduled for 27th December, 2018 to 1st January, 2019. The venue for the Lagos IVC Camps is the Human Capital Development Centre, Noforija, Epe, Lagos. 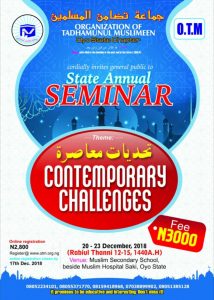 On Friday, December 21 and Sunday, December 23, a 4-day camping programme will be declared open for members of the organisation in Osun and Lagos at Nurudeen Grammar School, Iwo, Osun State and Husseinat Nursery and Primary School, Otto-Awori, Lagos respectively, with the same unified theme. 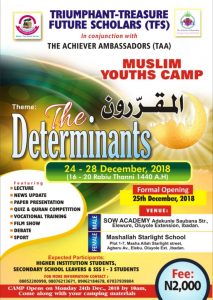 Muslim children are not left out of the camp galore as the organisers of various camping programmes have made provisions for their wards. The children’s camp, under the auspices of Unified Muslim Children Programme is organising camps at different centres in Lagos, Oyo, Ogun, Kwara and the federal capital, Abuja with the unified theme: The Creed! 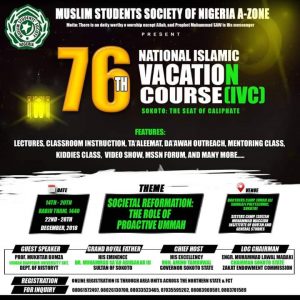 Thousands of Muslims in the North will converge at Umar Ali Shinkafi Polytechnic, Sokoto (male) and Sultan Muhammadu Maccido Institute for Qur’anic & General Studies, Sokoto (female) for the 76th edition of the annual Islamic Vacation Course (IVC) coming up at Sokoto.

The camping programme, with the theme: Societal Reformation: The Role of Proactive Ummah will hold between 22nd and 28th December, 2018. It is an initiative of the Muslim Students’ Society of Nigeria (MSSN A-Zone), which comprises of about 14 States. 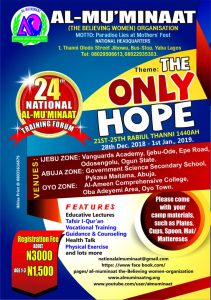 Apart from MSSNLagos, Pure Heart Foundation in Ogun and Oyo States who will be sharing the same venues but different facilities with their female counterparts, Al-Mu’minaat (the Believing Women Organisation) has concluded plans to hold their all-female camp between December 28, 2018 and January 1, 2019 as follows: