When Mr Godwin Obaseki was sworn in as the fifth civilian  governor of Edo State on November 12, 2016, the Muslim community rejoiced, believing that the man they overwhelmingly voted for, will respect their God-given rights and accord them the requisite regard and honour;  but little did they know they were about to witness the worst regime that will neither be sensitive to their interests nor care about their wellbeing in the State.

The governor, a Christian, chose another Christian, Mr Philips Shuaib as his Deputy in a State that has about 40 per cent of the Muslim population and this is against the principles of equity, justice and fairness as argued by the Edo State Chapter of the National Council of Muslim Youth Organisations (NACOMYO).

The leadership of a political pressure group Development and Good Governance Mandate (DGGM) and another group, Edo Muslims for Equity and Good Governance, (EMEGG), Mr Ibrahim Momoh and Mr Sirajdeen Mohammed respectively had earlier demanded for Christian/Muslim ticket during the last gubernatorial election but the ruling All Progressives Congress (APC) ignored their demands and picked Mr Philip Shuaib, a Christian as running mate to Mr Obaseki. 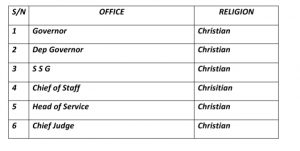 Mr Sirajdeen said his group EMEGG had written twice lately to the Governor but the Governor has failed to acknowledge their demands.

Muslim News findings revealed that the first set of appointments made by the Governor after his victory at the poll were all Christians. The appointees are Osarodion Ogie as the Secretary to the State Government (SSG), Mr Taiwo Francis Akerele as the Chief of Staff, Government House and Mr Crusoe Osagie as the Chief Press Secretary (CPS).

The Governor went further to approve the appointment of Mr Isaac Ebose Ehiozuwa, another Christian as the Head of Service of the state. Interestingly, Ehiozuwa took over from Mrs Gladys Idahor, another Christian, who retired from the Edo State civil service.

In an attempt to perfect the Christianisation of Edo state, the Governor favoured another Christian, Justice Esther Ikponmwen as the Chief Judge of the State.

The Governor did not find Muslim politicians in the ruling All Progressives Congress (APC) worthy of elective posts despite their contributions to his victory at the poll, he carefully selected 18 personalities as commissioners – and all of them forming the executive council of the State as at August 2019, are Christians. No single Muslims in his cabinet.

Muslim News investigations showed that only two – Hon Kabiru Adjoto and Mr Yakubu Gowon, out of 15 special advisers appointed by the Governor as at August 2019, are Muslims. The remaining 13 are Christians.

In his humiliation sojourn, his relegation antics and his exhibition of utter disrespect to the Muslims, out of 18 local government chairmen, only Alhaji Alimeya Momoh of  Etsako East  Local Government was good enough to be Chairman. The only other LGA Chairman who is Muslim, Alhaji Yakubu Musa of Etsako West LGA was removed by the Governor in a macabre show of vindictiveness ostensibly because he allegedly exposed fraud in the local council’s payroll, a vindictive strategy that has been very consistent with Obaseki.

Furthermore, under Obaseki’s watch, in the legislative arm of government, the 3 senators and 9 house of reps members are all Christians.

Further, of the 24 house of assembly members in Edo State, only two members of the State Assembly, Hon Gani Audu – a returning lawmaker and Seidu Oshiomhole, a lawmaker elect till date, are Muslims.

Interestingly, the two Muslims are among the 15 he reportedly sidelined in his late-night clandestine inauguration of nine house of assembly members-elect.

Muslim News findings also revealed that the governor failed to constitute a pilgrims welfare board for Muslims in the state for close to three years of his administration.

Observers said the Muslims community in the State who are supposed to fight for the interest of their members are not united, with allegation that the Governor is using divide and rule tactics in handling the affairs of the Muslims in the State.

Sources cited as an example the factionalised Imamship in the state. The State once had two different Chief Imams for Benin City, namely, Alhaji Abdulfatai Enabulele, and Alhaji Jamiu Edosomwan, adding that, despite court judgement in favour of Alhaji Edosomwan (now late), the followers of Alhaji Enabulele on several occasions disrupted Jumah services.

Sources said Alhaji Enabulele got the support of the Governor to emerge as the Chief Imam of Benin after the demise of Alhaji Jamiu Edosomwan, who died in December 2018. Although the case has been rested, some Muslim leaders loyal to the late Imam are not happy with the development.

As if that was not enough, the Edo branch of the apex Islamic body in Nigeria, NSCIA has been enmeshed in crisis as there exist currently two parallel executive councils being headed by Alhaji Nurudeen Asunogie and Alhaji Abdul Azeez Igbinidu.

“A look at the public sector currently reveals the asinine hatred the current Governor has for Muslims where there is a near zero representation of Muslims in the state administration,” a member of the political pressure group DGGM, who identifies himself as Abu Abdul Hameed said while speaking with Muslim News correspondents.

According to him, “What was it that the Muslims did to the governor that makes him act with such level of disdain and total disregard? The reason for this non-inclusion remains unfathomable. Could it be as a result of incompetence, or non qualification? A $64m question for the discerning.

“The fact is that the Muslims gave bloc votes to the Governor during the last gubernatorial elections apparently because they appreciated the transformational programmes of his predecessor and benefactor, Adams Oshiomhole and longing to see that the trend continues.

“But it must be reiterated that Edo Muslims are not a conquered part of the populace who can be ignored or denied their fair share of the proverbial dividends of democracy,” he added.

A factional leader of the Nigerian Supreme Council for Islamic Affairs (NSCIA) in the State, Alhaji Nurudeen Asunogie described the gross marginalization of Muslims as a deliberate and calculated attempt to mortify and humiliate the Muslims and say they are inconsequential.

He demanded that the Governor must treat the Muslims as human beings especially because the bulk of the votes the APC got in the last General Elections came from Edo North -the Muslims dominated part of the State.

“But when it came to appointement of ministers, Edo got two Ministers and they were both non-Muslims. Further, when he chooses Commissioners from the Muslim dominated areas, he seeks and appoints the minority religious adherents. And this cannot be due to incompetence.

“It is not inadvertent, they purposely did it and it’s sad considering the contributions of Muslims during their electioneering campaigns,” he told Muslim News in a phone conversation on Saturday, August 24.

According to him, The only thing they want us to struggle for is who becomes the Chairman of the State Muslim Pilgrims Welfare Board. They want to see us fighting over that while they sidelined us . We are always with them from the beginning. We actively participated in their political activities but by the time they’re about to share, they forget us. And they did that successfully because of our internal differences.

He said NSCIA tried to create a platform where they will be able to engage government but the same effort has been frustrated by some traditional leaders who claimed to represent Islam. We call on the government to treat the Muslims well. We are humans and bonafide members of the State.

Also speaking with Muslim News, the factional chairman of NSCIA in the State, Alhaji Igbinidu said it is an open fact that the Muslims in Edo State have been grossly marginalised and not adequately represented in the Obaseki government.

According to him, we have been sidelined in Edo State despite our active participation in politics. It didn’t start with Obaseki. We had similar challenges with previous governments and attempts to address this issue was truncated.

As the adherents of second most popular religion in the State, Muslims should be adequately represented in the affairs of their beloved state, Alhaji Igbinidu said further.

“We’re not even demanding 50/50 sharing formular, we would have appreciated 20% but now, we don’t have anything close to what you can call a balance.

“It is so bad that issues that affect Muslims are being handled by non Muslims. Imagine situation where the other side determine your affairs. Does that mean we don’t have capable hands? Absolutely no! We’re blessed. I can tell you with facts that we are blessed with capable hands. If you’re talking about competency and character, we have got them. Yet, we got nothing.

Alhaji Igbinidu believed that the way out is for the Muslims in Edo state to bury their differences and unite.

He said, “we are partly responsible because we are not united. We aren’t cooperating with ourselves. That’s also another problem we need to address. The situation here is about Muslims trying to bring down fellow Muslims. Agreed that we have been marginalised, but how do we handle the little that got to us? It is like a battle, Muslims try to pull down Muslims. Unity is needed to be able to fight the unjust maltreatment of Muslims.

Muslim News efforts to get the reaction of the State government did not materialise. However, this medium shall at anytime be ready to publish the reactions to the claims of marginalisation by the Muslim community from Obaseki or any of his aides.

EDO, the heartbeat of the nation is reputed to be the melting pot of the Nigerian state. Aside, the three senatorial districts of Lagos and Abuja FCT, Edo south is without doubt the most cosmopolitan of the 109 Senatorial districts in Nigeria. It is also reputed to be where the east meets the west and the north connects the south, which is why its slogan is the heartbeat of the nation, Muslim News learnt.

Political observers said the recent happenings in the Edo political sphere however, is fast eroding this status.